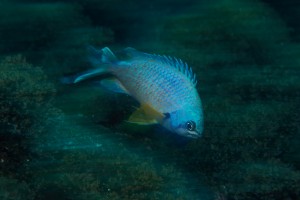 The coast of Pico is quite special in wildlife action.

This summer I focussed on Coastal areas .

Much overlooked by divers and photographers .

Most divers focus only on the big stuf like Blue sharks, Mobula’s,Dolphins.

This is alright but most forget to spend time and explore the fabulous coastline of the Azores.

I decided to spend this summer looking more closely in this forgotten realm .

I focussed on photographing “ordinary ” animals in an ” extra ordinary ” way.

At the end of Summer the result was spectacular and discovered some real gems .

TO give an example :Damsel fish!

Atlantic damsels spawning time was a truly special event that happens every year during summer time.

Normally being in large groups , ordinary colored and not really exciting to photograph.

During a few weeks before new moon Damsels get the complete Makeover!

Pico Coastal diving has some really spectacular things to offer.

You only need to open your eyes !